This year’s Double Eleven still has two voices. The first roughly means that Double Eleven has calmed down, and the second means that Double Eleven has changed. After reading various analysis articles, they are very professional, and the professional ones are a bit eye-catching. I don't understand, and there are different voices, making it impossible to find the consistency.This article never denies the point of view of each platform’s analysis, and finds a deeper consistency. If you don’t understand it, please bypass it. If you understand it, please criticize and suggest corrections. 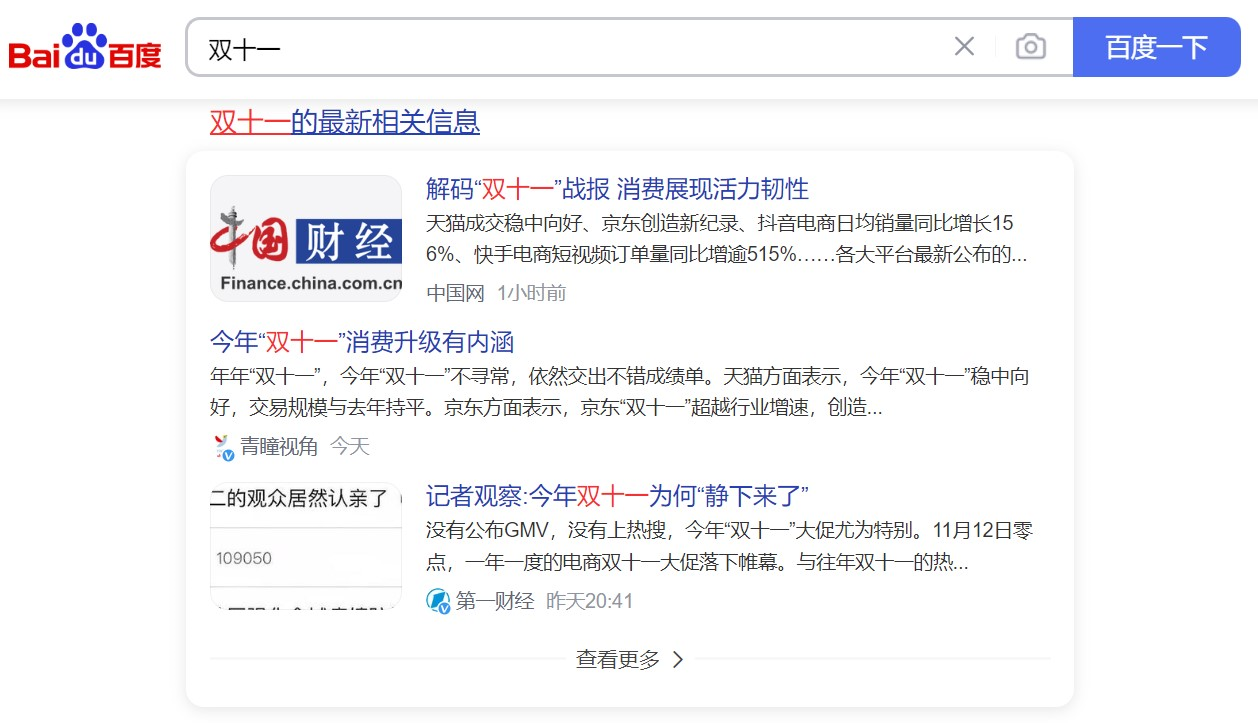 The ten-year rise and fall of Double Eleven 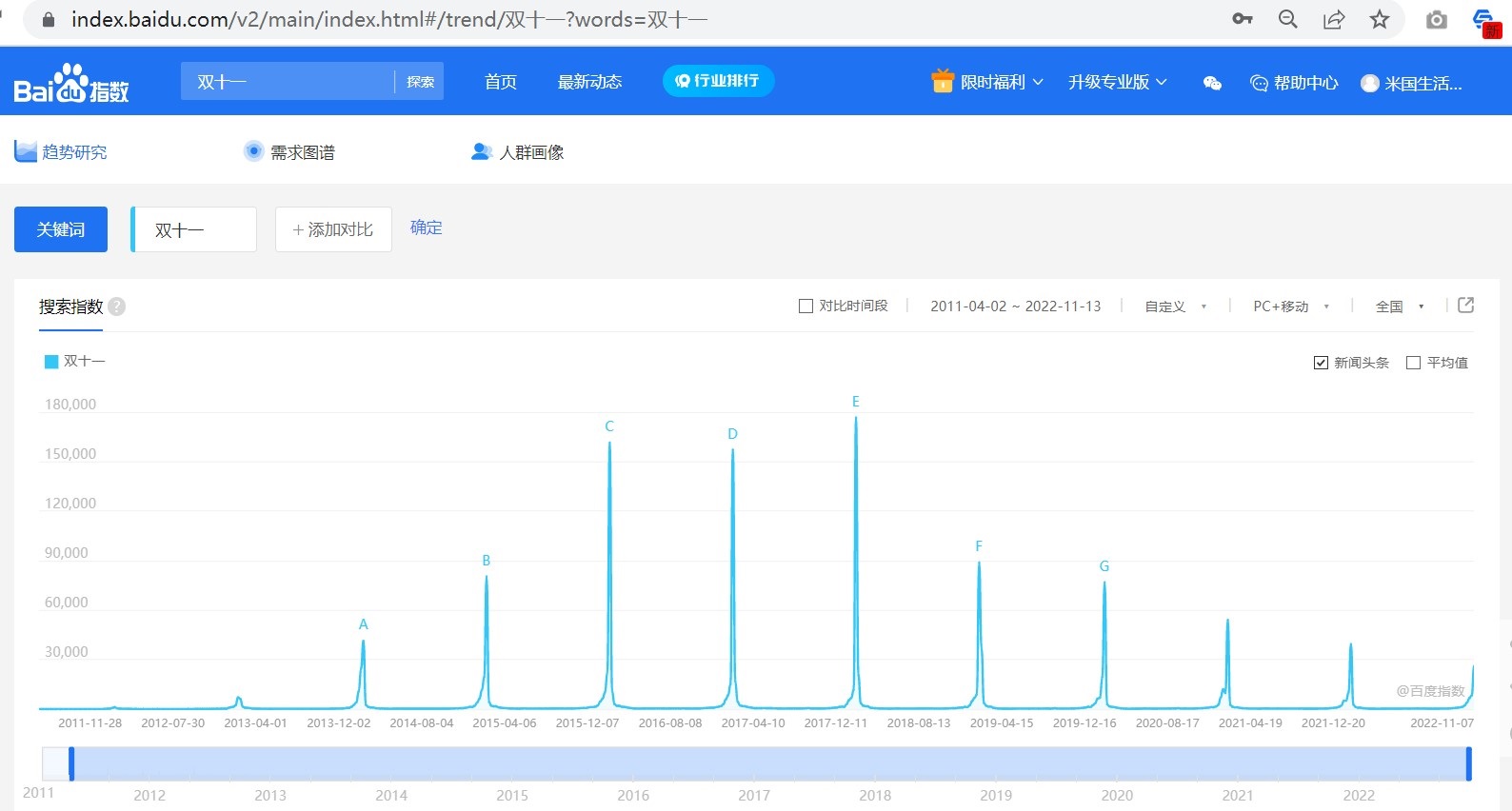 Judging from the Baidu Index, Double Eleven has experienced ten years of ups and downs. Every year, there is always a popularity. The highest popularity is nearly 18 indices (non-continuous, event-based indices). From the beginning of 2011 to the rise and fall of 2022 The process, like a cycle, does not always exist, nor will it exist forever.

Citing Baidu EncyclopediaBaidu IndexExplanation: Baidu Index can tell users: how big is the search scale of a certain keyword in Baidu, the trend of ups and downs in a period of time and related changes in news and public opinion, what kind of netizens who pay attention to these words, where are they distributed, and at the same time What relevant words are searched to help users optimize digital marketing campaigns.米国生活In my opinion, the Baidu Index is really a good thing, the premise is that you can read it, but it is difficult to read it in depth.

The starting point of Double Eleven

It was before November 2013, 11 when Double Eleven was introduced to my ears, and I paid attention to and analyzed it. It was not paid attention to by this author in 11 and 2011.The author's first reaction is that this kid is too bad. He uses human nature to pass on the consumption desires of singles on Double Eleven and the unified behavior habits of Double Eleven Singles' Day nodes. Transform it into commercial behavior and commercial interests, and at the same time, attack offline merchants to a greater extent, form online store centralization and attack that cannot be effectively combined offline, and establish the advantages of online store platforms to a greater extent.For so many years, I have always thought so. 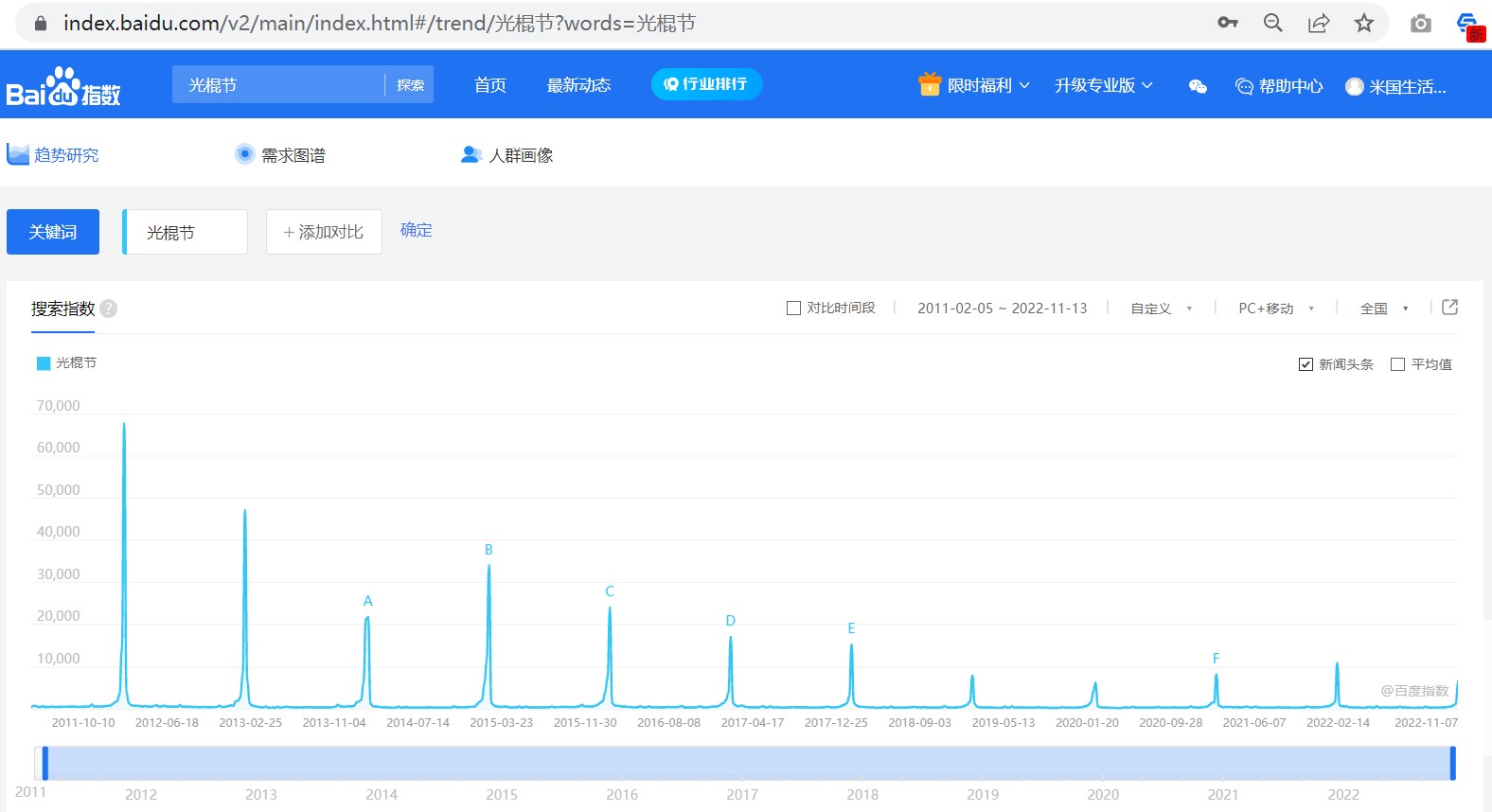 Singles' Day is the mother of Double Eleven.

Of course, it was not Singles’ Day that gave birth to Double Eleven, but Double Eleven was parasitic on Singles’ Day.Singles' Day is a national event,米国生活For nationwide activities, draw a line from the Baidu index to an index of 3 or more (with changes in population structure and Internet usage habits of the population, this line may fluctuate up and down according to actual conditions, and is not a fixed value). 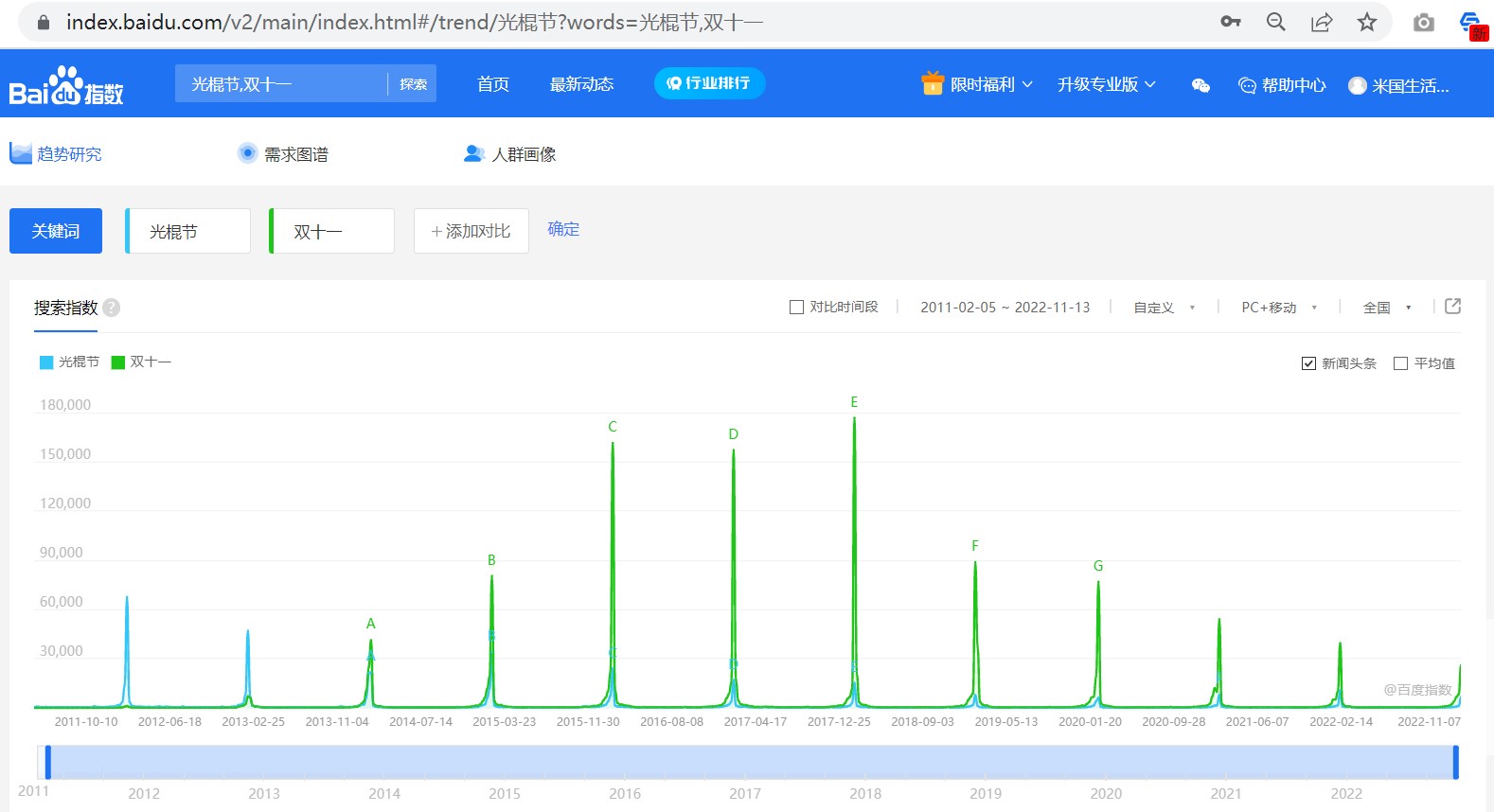 From the analysis of the Baidu Index in 2011, 2012, and 2013, the sum of Double Eleven and Singles’ Day is almost the same. It can also be seen that some of these people were successfully transformed by Double Eleven. People may not get the happiness of being single from Double Eleven, but have rebounded. However, Double Eleven has grown into a national event (2014 index), with the addition of capital power and the promotion of seed users, forming a far beyond the "matrix" " market influence.Therefore, it is a collective case of selling yourself to count money for others.

The growth attribute of Double Eleven, human nature is greedy for cheap.Regardless of whether the platform is really high-quality and cheap, or whether it is really genuine, people choose to participate in this event and hoard goods, they must be greedy for cheap.Being greedy for cheap is the evil of human nature. In the process of greedy for cheap, people's decision-making lacks concentration in the chess game between platforms and businesses, which has a reduced impact on China's excellent culture.

This article does not discuss the detailed process of economic evolution, because it has been said too many times in multiple scenarios before, and only briefly elaborates on the conclusion. This kind of activity does not make a positive contribution from the essence of value creation, but only transfers consumption time This segment has increased specific speculative opportunities and increased competition between platforms. For example, XNUMX, it’s just one time, and it’s all about whoever is wrong. Anyway, it’s all leeks.

Above, a horizontal analysis of the Double Eleven event was made.

Below, make some longitudinal comparisons of the Double Eleven events. 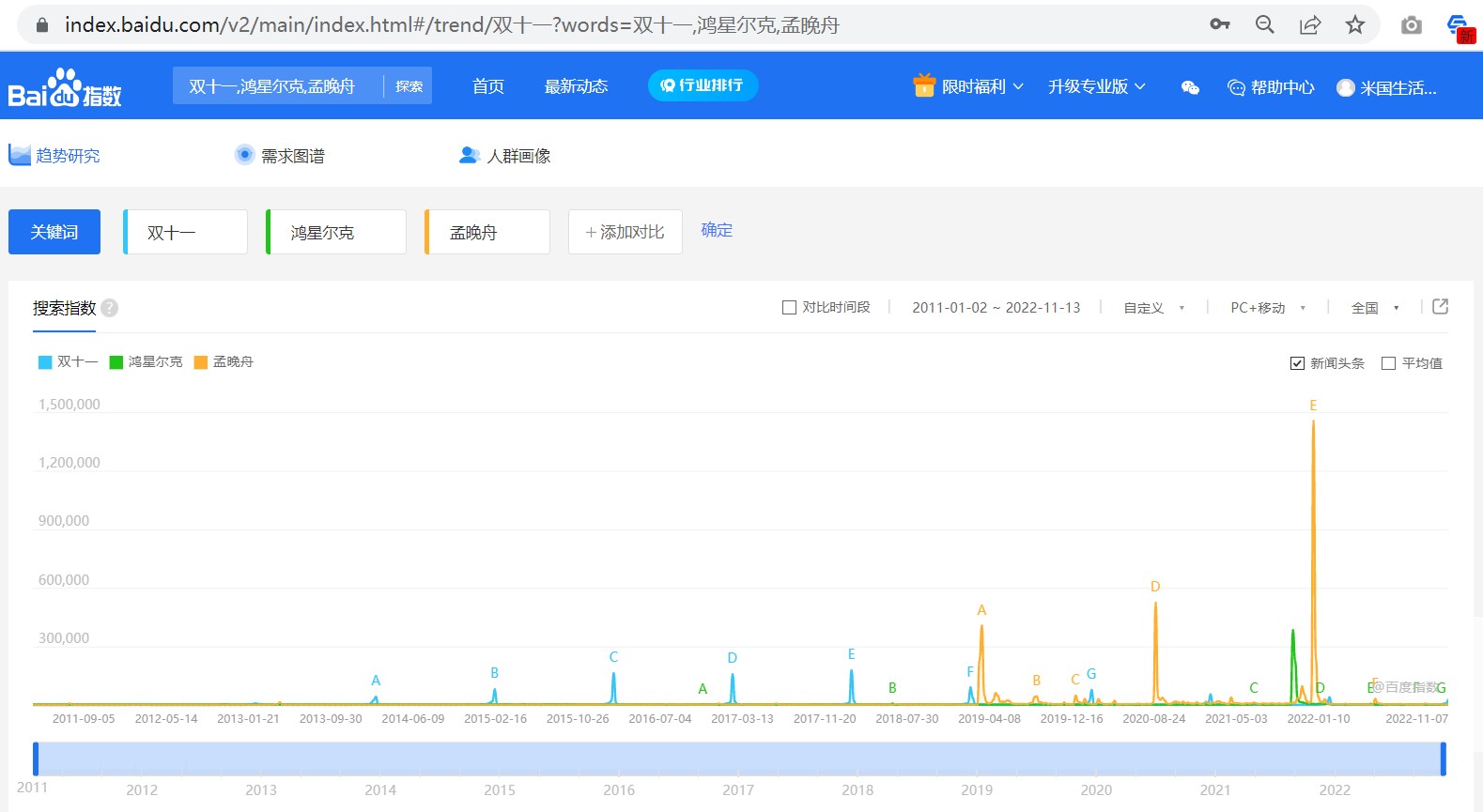 The index analysis of national events is too complicated, but it can be used as a reference analysis basis in the analysis of international and domestic decisions at various levels. Therefore, the author recommends researching Baidu index analysis methods.

What are the usual brand marketing strategies?